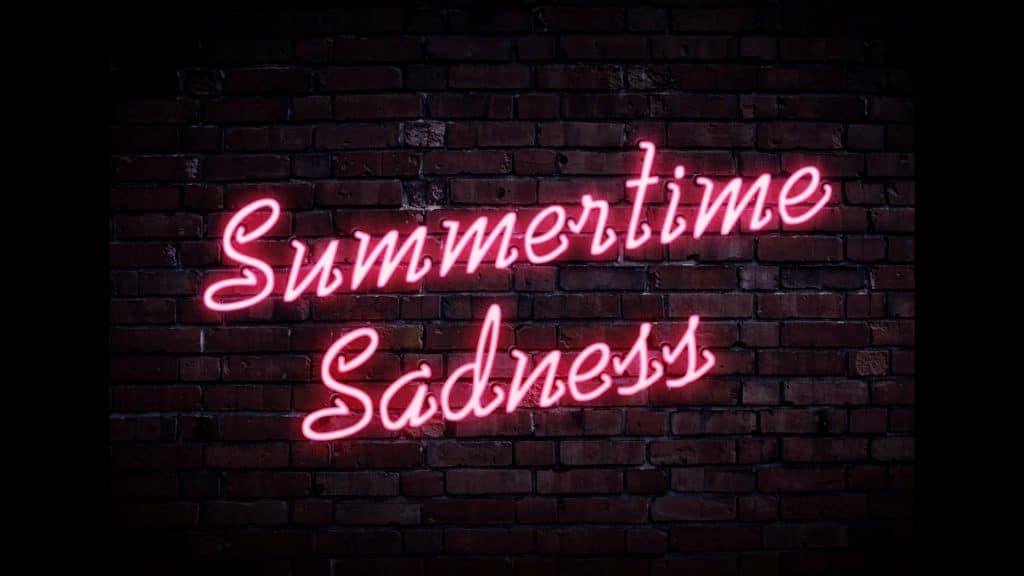 We have just entered spring and that also means that the good weather and rising temperatures will begin to be part of our daily lives.

This means for many people, spring & summer is a reason for joy both for the increased sunlight and the number of hours available in which you can perform outdoor activities alone or in the company of family and friends.

However, as strange as it may seem, there is currently a small part of society to which the arrival of summer is a great reason for sadness and anxiety, causing the most joyful season of the year to become a real ordeal for them. These people suffer from the so-called Reverse Seasonal Affective Disorder (SAD) in the Summer.

The SAD is known by all as the seasonal affective disorder that usually manifests itself in most of the population during the winter months, causing us to feel sadder, anxious and with many problems to fall asleep or concentrate on our daily tasks.

This seasonal disorder does not pose a great danger to society or to those who suffer from it, since its causes are very clear and the symptoms are usually neither too intense nor last longer than the cold season.

However, with inverse SAD it is not so simple, as only 10% of the total population, of which only 1% are US residents, suffer from it and its causes and corresponding treatment are still unclear.

While with standard SAD the main cause of sadness is due to the decrease in sunshine hours and low temperatures, with reverse seasonal affective disorder it is suspected that it is just the other way around, with high temperatures and too much sunshine during most of the day causing irritability and severe depression.

Below, with the intention of helping those who believe they suffer from this strange disorder, to better inform the rest of the population about its existence, and how important it is to know how to detect it and be sympathetic to those who suffer from it, we are going to explain in detail what reverse SAD is, its main causes, the differences it presents with winter affective disorder and some ways of treatment.

What is Reverse Seasonal Affective Disorder (SAD) in the Summer?

Fortunately, reverse seasonal affective disorder has a minimal incidence worldwide, affecting so far only 10% of the global population. Because of how rare this disease is, it makes it difficult to help people who are suffering from reverse SAD.

Therefore, we could define Summer SAD as the seasonal affective disorder that occurs during the summer months and presents a very similar symptoms to traditional winter SAD, which is characterized by anxiety, lack of sleep and apathy.

As we have been saying throughout the previous point, the main symptoms of the reverse seasonal affective disorder are very similar to the SAD that occurs during the winter.

The only difference and particularity that they manifest themselves during the summer and with a somewhat higher intensity.

Here are some of the most common symptoms of Summer Seasonal Affective Disorder:

Of all these symptoms, the most prevalent and the one that generates most concern among experts is depression. Winter seasonal affective disorder easier to treat because it is better understood.

In the case of summer depression it is much more severe, presenting pictures of sadness, irrational feelings of guilt and even the appearance of suicidal thoughts.

In addition, according to several studies the people most prone to suffer from this disorder, whether in winter or summer, are people with recurrent arthritis problems and teenagers with a very low level of self-esteem.

Without the help of an appropriate professional to help them balance and sort out all their emotions, people suffering from reverse SAD could continue to suffer from symptoms indefinitely beyond the hot months, causing them to become ill and putting their lives at serious risk.

Therefore, if you think you suffer from it or know someone who does, don’t keep quiet and seek help, because reverse SAD is a serious condition that might need treatment.

Although the SAD that occurs during the winter and during the summer season may seem almost the same in terms of symptoms and causes, the reality is that they differ in other ways beyond the season in which they manifest themselves.

This excessive agitation also causes people with reverse seasonal affective disorder to feel that their sexual desire is increased, while people who suffer from winter SAD might experience no difference or decreased sexual desire.

Although, at first, the fact that a person loses weight may seem beneficial, in the case of this disorder it is not, since it is due to an excessive increase in the general functions of the organism, which can cause that excess of energy to end up causing a serious weight loss that in turn can put the general health of the patient at risk.

Therefore, both excessive weight gain and rapid, uncontrolled weight loss are very detrimental to health and both should be treated promptly by a professional.

Although most experts still do not know what is the real cause of this peculiar disorder, there are many who already point out that the cause of this disease is the excess secretion of melatonin.

Melatonin is a powerful antioxidant that people secrete normally to regulate our brain functions and protect them from oxidation or the appearance of any type of disorder.

However if the secretion of this hormone is excessive it will interfere with the production of serotonin, which is vital for the regulation of our mood and neuronal functions.

This strong imbalance between serotonin and melatonin levels seems to be one of the possible causes of reverse seasonal affective disorder, mainly provoking the appearance of symptoms attributed to depression and causing many of these patients to be misdiagnosed, thinking that they suffer from a “common depression” when in fact they have a much more complex disorder.

On the other hand, studies have also revealed that reverse seasonal affective disorder may have a genetic cause, since 60% of the patients who present it have at least one family history of severe mental problems, which denotes the seriousness of this disorder and the need for experts to start studying it in depth to avoid misdiagnoses that will only not help the patient, but could make them worse in a few months.

White, red and blue light treatments as well as the use of light boxes or super modern light glasses have proven to be a good remedy to fight the manage symptoms of SAD, whether summer or winter.

Experts recommend experimenting with the different light treatment options available until you find the type of light that works best for you, since the type of light you need will vary depending on each case of the disorder and the specific symptoms presented by each patient.

The use of antidepressants

As one of the main symptoms of this disorder is depression and anxiety, the use of antidepressants is a good alternative to alleviate the disorder and prevent these symptoms from worsening, putting the patient’s life at serious risk.

However, whenever you suffer from this disorder, as well as any other mental problem, you should always consult a professional to determine the type of antidepressant you should take and the dosage.

In conclusion, now that you know that the reverse seasonal affective disorder is real and very dangerous, every time you know of a case or suspect that someone may be suffering from some of the symptoms we have explained here, act.

Do not keep quiet for fear that the other person will be upset or offended, because what they really need in those moments is for someone to take them seriously and give them all the support they need to overcome such a complicated disorder.