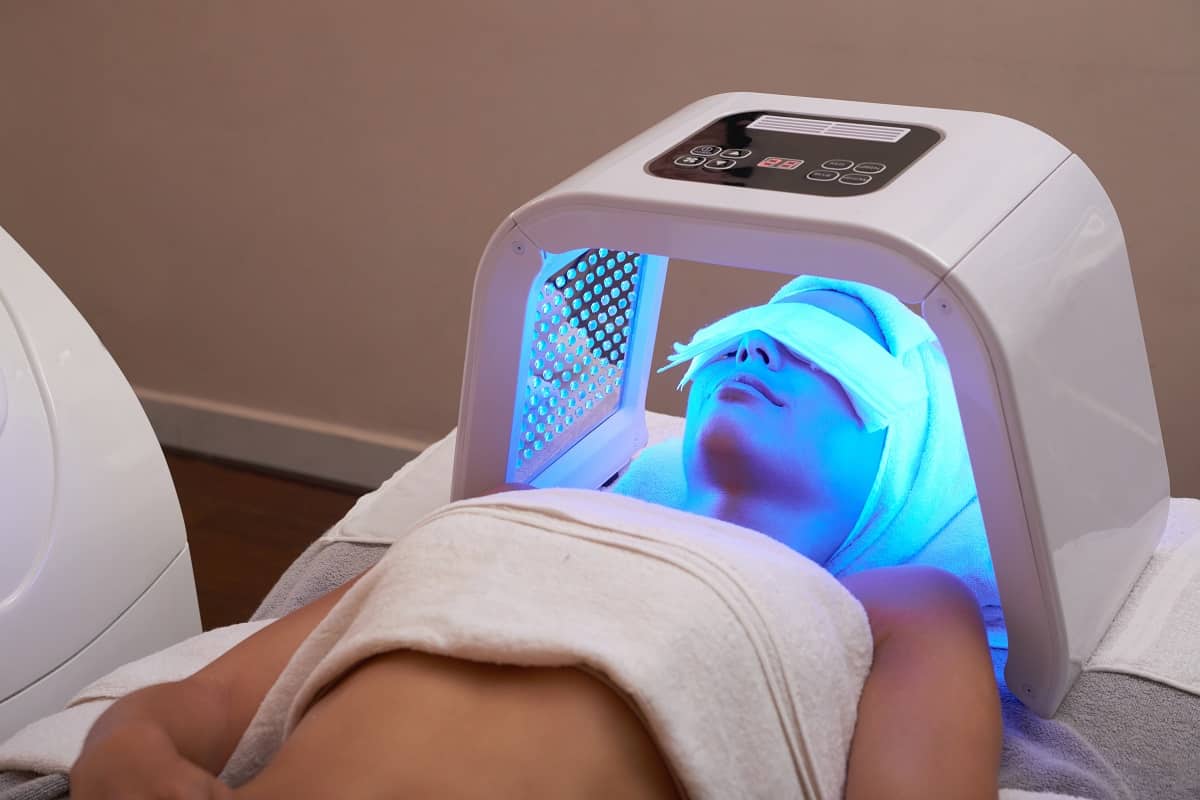 How does light therapy work?

2,500 years ago, doctors in classical Greece said that their patients could benefit from moderate exposure to sunlight. Avicenna, a Persian scholar, and doctor in the 10th century, also commented on the benefits of sunbathing in moderation.

In Europe, it was the French doctors who, in the mid-18th century, were able to see the beneficial effects of moderate sunbaths in patients with different skin infections.

Currently, the methods have evolved and now there is a name to call this type of practice: Light Therapy.

What is Light Therapy?

When we say light therapy – also known as Phototherapy – we refer to the use of ultraviolet light, a certain part of the solar spectrum, for the treatment of different skin diseases and sleep disorders. Psoriasis, in particular, ends up being one of the most benefited by this type of method.

The pathogenic mechanism of psoriasis is based on the arrival of inflammatory cells to the skin. They generate redness and inflammation by the messages they send to keratinocytes (skin cells) to reproduce more rapidly which causes an increase in the thickness and peeling of the epidermis

In this scenario, the useful part of the solar spectrum, which are type A and B ultraviolet rays (UVA and UVB), have the property of slowing down the reproduction of the keratinocyte and relaxing the activity of inflammatory cells.

Despite its classic treatment character, phototherapy remains in full force today, due to its few contraindications compared to other treatments.

Phototherapy is also used as a way to treat seasonal affective disorder, a type of depression that occurs at a certain time of the year, usually in autumn or winter.

During photo-therapy, one sits near a device known as a light therapy lamp. While you carry out any activity such as reading, working or watching TV, the lamp emits a bright light that mimics natural outdoor light.

It is believed that light therapy affects brain chemicals linked to mood and sleep, and consequently relieves the symptoms of seasonal affective disorder. The use of a light therapy lamp can also help with other types of depression, sleep disorders, time lag and adaptation to a nighttime work schedule.

With all these benefits, it’s clear that light therapy may be something you should consider if you have some of the symptoms mentioned above. In addition, numerous positive effects have also been tested on aesthetic issues. But now you may be wondering. How does light therapy work?

Basically, the operation of this treatment has to do with the chemical effect that certain light waves – in a certain wavelength spectrum – have on the human body.

As with sunlight at a daily dose, light therapy is an energy exchange process in which different results are generated depending on the type of rays to which we are exposed.

There are different types of light therapy treamtments.

How many types of light radiations are out there?

It is mainly used as a thermo-therapeutic agent through an infrared camera. This type of radiation can’t be seen but it feels warm when we experience it. When heat is applied by the lamp, it must be placed in a way that can apply the radiation to the full extent, but also in a manner that the person is not upright to the lamp. It is used for its thermo-therapeutic effect.

They have therapeutic and biological effects on the body, but also harmful effects in excess. They are more harmful when the length of the wave is shorter because they are closer to X-rays and become more radioactive; with greater chances of generating cancer if overused.

It’s a special artificial light that is created by the amplification of light through a process of stimulated emission of radiation.

For this, a light plus a chemical compound (solid, liquid or gas) is required. Light stimulates the chemical compound by increasing its energy leaving a much more powerful light (of a single color: white, red, infrared, green), coherent, even capable of cutting tissues.

Side Effects Of Light Therapy Treatments:

Side effects are similar to those produced by the sun. Occasionally redness of the skin may appear with burning, more or less intense.

It also usually develops a skin pigmentation similar to summer tanning and, sometimes, dry skin, a fact that requires the use of moisturizers. In the long term, greater cutaneous photo aging (wrinkles, spots) may develop and, in some cases with many accumulated treatment cycles, there may be a risk of skin cancer.

How long does it take for light therapy to work

Depending on each particular case and the modality indicated, the treatment can last between an average of 1 to 4 months in very short and progressive sessions, from 1 to 10 minutes, which are applied 2 or 3 times per week.

When we ask, “how long does it take for light therapy to work” the answer might not be a straight number.

It completely depends on the complexity and extent of the problem to be treated and the quality of the device you are using. With good quality devices, many users notice a difference after 20 minutes of light therapy. For others, it takes up to 24 hours to feel the benefits, since the light energy remains in the bloodstream and the system for 48 hours.

However, the truth is that with each session we do we will increase the benefits exponentially, so the key is consistency.

How do light therapy lamps work

Lamps for light therapy work by heat, emitting light rays by means of an electrical stimulus like any conventional lamp. The possible ways and applications of these types of lights depends on the wavelength of the rays emitted.

The area of the spectrum from 400 to 700 nanometers is that of visible light. Above 700 nm is called infrared light and below 400 it is called ultraviolet light

For many years fluorescent tubes or halogen lamps were used as light sources for light therapy. Currently, light emitting diodes (LEDs) are the new type of light source used for these practices. LEDs deliver more efficient power, have a longer lifespan and are portable, with low heat production.

How does red light therapy work

It is said that in the 1990s astronauts took plants to the space station, and discovered that the red LED light helped them grow and accelerated photosynthesis. It didn’t take long for research began to explore if these light frequencies could have any effect on human cells, and the answer was yes.

The principle of operation of red light therapy is the stimulation of mitochondria, the organelles that are inside all the cells of your body, which are responsible for producing energy in the form of a molecule named ATP (Adenosine triphosphate). If mitochondria are stimulated with infrared radiation, they can produce more ATP, which the cell will then use to regenerate and repair the damage, or in other words, rejuvenate. In fact, aging is identified as a decrease in mitochondrial activity.

These are some of the applications where the utility of red light therapy treatments has been proven:

It helps with healing in burns, skin grafts, infected wounds or amputations, increasing the rate of regeneration of the skin and other tissues. It has also been proven in wounds that heal poorly, such as foot ulcers due to diabetes. It also improves the appearance of burn scars.

It stimulates follicles and hair growth in people suffering from androgenetic alopecia (permanent hair loss – baldness). It has also been used successfully to treat psoriasis and was found to stimulate the formation of collagen in the skin; and reduce wrinkles by treating them only with light without the need to add photosensitive products.

It improves joint function in people with arthritis and pain in rheumatoid arthritis. It has also been used for the treatment of carpal tunnel improving strength, although in this case, it did not help with the pain. It also has been proven to work well in order to treat tendonitis in the Achilles tendon.

How does LED light therapy work for acne

Just as the red light has proven its effectiveness in reducing the aging of the skin and taking care of its aesthetics, the blue LED light has also been successful in treating one of the aesthetic discomforts most experienced by people today: acne.

The blue light treatment is a different technique from the laser or pulsed light; In this case, it is not an invasive or ablative light. Through LED lamp, a narrow, low power, visible light is provided and it doesn’t have UV rays. The emitted light activates a photosensitizer that is found inside the bacteria that causes acne, destroying it and, therefore, reducing the associated inflammation. In addition, it produces cellular bio-stimulation that improves the appearance of the skin.

There is currently a lot of popularity in these types of treatments for acne reduction and overall skin improvement.

Wanna Learn More About Led and Red Light Therapy? Check out our other posts below…

Our Other Product Reviews for light therapy https://sadlampsusa.com/reviews/

© 2022 Sad Lamps USA. Carnesmechanical is a participant in the Amazon Services LLC Associates Program, an affiliate advertising program designed to provide a means for sites to earn advertising fees by advertising and linking to Amazon.com. Amazon and the Amazon logo are trademarks of Amazon.com, Inc. or its affiliates.